Average residential property values in Hamilton have spiked 27 per cent since 2012, leaving homeowners to wonder if tax hikes will follow.

The Municipal Property Assessment Corporation reassesses the value of all properties in Ontario every four years. Cities use that data to figure out how much you pay in taxes.

While Hamilton’s assessed property values have jumped, the city didn’t even make the Top 5 list for biggest municipal increases. The poster-child for overinflated home prices, Toronto, saw an average increase of 30 per cent, as did Oakville and Burlington. Richmond Hill and Markham topped the greater GTA with average increases of 47 and 45 per cent, respectively.

A hot housing market is largely responsible for the dramatic boost, said Greg Baxter, director of valuation and customer relations for the non-profit assessment corporation.

“There are always pockets in every community where the market behaves differently,” he said. “But in the GTA, and extending all the way to Hamilton, in general real estate values are increasing substantially.”

It’s the kind of news that worries local taxpayers waiting for MPAC notices that started going out July 4 in Hamilton. It makes city officials nervous, too — mostly because they’re braced for phone calls from residents asking if their taxes will go up 27 per cent.

The answer is no — and in fact, a property value increase doesn’t even guarantee your taxes will go up, either. The city has a dedicated page on hamilton.ca to answer resident questions on property reassessment. 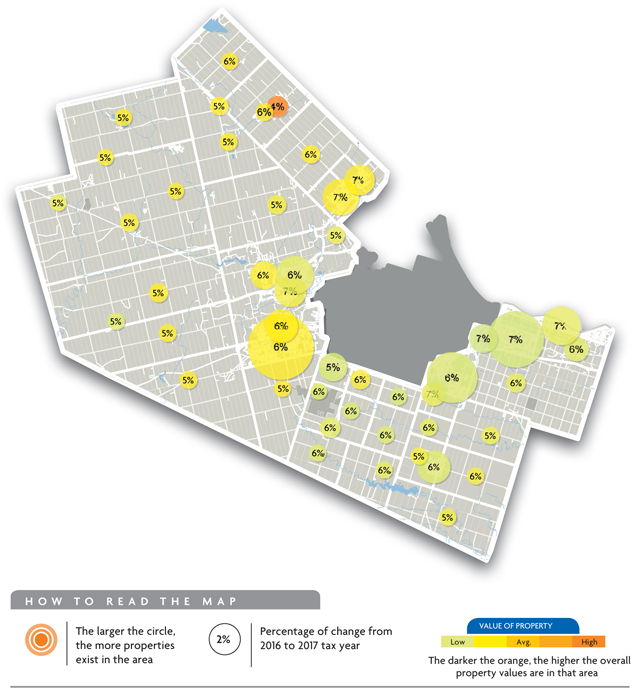 Here’s our primer on how it works — and what to do if you think MPAC got it wrong.

Why am I receiving this notice?

The Municipal Property Assessment Corporation reassesses the value of all residential properties every four years. Cities use that data to figure out how much you pay in taxes.

Are my taxes going to go up?

Your taxes are calculated by multiplying the 2017 assessed property value in your MPAC notice by a tax rate set by city council.

As a taxpayer, you really only have to care whether your increase in assessed property value is higher or lower than the city average. (That’s 6.9 per cent each year from 2017 to 2020, or about 27 per cent in total.)

Don’t bank that tax cut right away, though. The last two scenarios are only guaranteed if city spending stays the same.

In reality, municipal spending goes up each year — so a prospective tax cut is just as likely to morph into a smaller-than-average hike, instead.

For theoretical examples of tax impacts, visit hamilton.ca and check out the web page on the 2016 reassessment.

How can I tell if my increase is higher or lower than the city average?

Your notice shows your change in assessed value in dollars, not by percentage. You have to do the math.

Why did my property value go up so much?

MPAC takes many factors into account in assessing property value, but real estate sales in your neighbourhood play a big role — and Hamilton home prices have skyrocketed.

Location, property and building size, age of the home and renovations can all play a role. MPAC has a special website, aboutmyproperty.ca, to help explain how they assess your property. It even lets you compare your home to others in the neighbourhood.

What can I do if I disagree with my reassessment?

First, ask for a free reconsideration. The forms are available at mpac.ca. If that fails, you can pay $125 to formally appeal. You have to do so within 120 days — so don’t wait to see your tax bill.

Also don’t assume the effort is futile — nearly half of all reconsideration requests result in some sort of change. But don’t make up information about your home — it is possible MPAC could visit in response to your request.

MPAC offers this advice: If you think your house could sell for the assessed value, the reassessment is probably in the right ballpark.

Understanding your MPAC notice (below)

• We’ve included a section of a property assessment notice for a west Hamilton single family home.

this article is courtesy of The Hamilton Spectator

2016-07-13
Previous Post: Keep Your Grill in Grade A Form All Summer
Next Post: 10 Questions to Find the Perfect Home!